The majority of the summer leagues started in April and are now coming to close. However, the mixed doubles league starts on July 23rd. Any members wishing to take part should contact the match secreatry or one of the mixed team captains.

All members are welcome to play in our teams which cover a broad spectum of ability. We really do have a team for you!

We had 24 players competing for the July 20/20 cup, playing under our new flood lights for the very first time. The winners of this month’s competition were Alex Bishop and William Fisher, winning the final 21 – 16 against Chris Reid and Richard Etheridge. The other semi-finalists this month were Catherine Mun-Gavin, Nick Wright, Chris Belton and Nicola Chand. 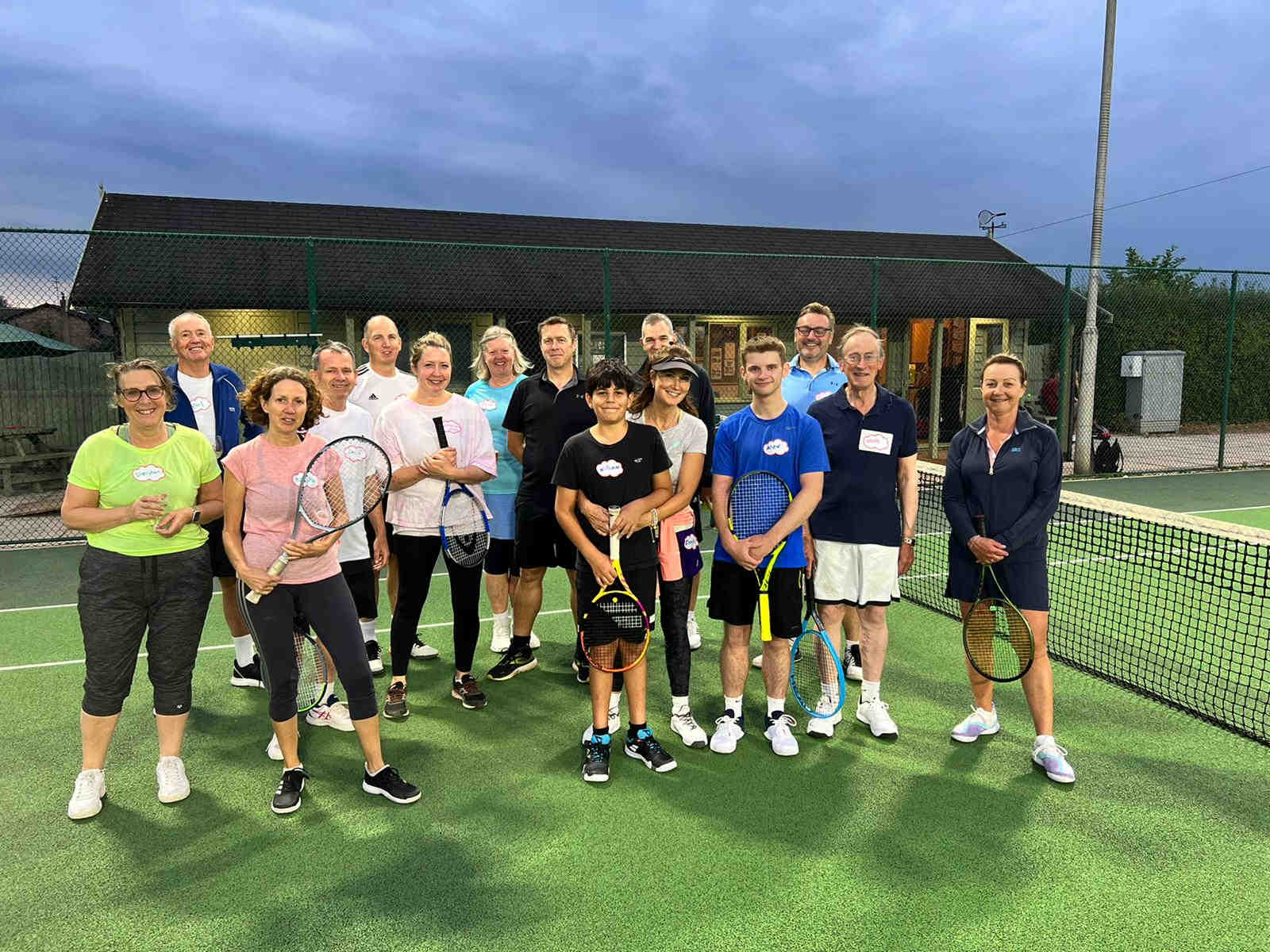 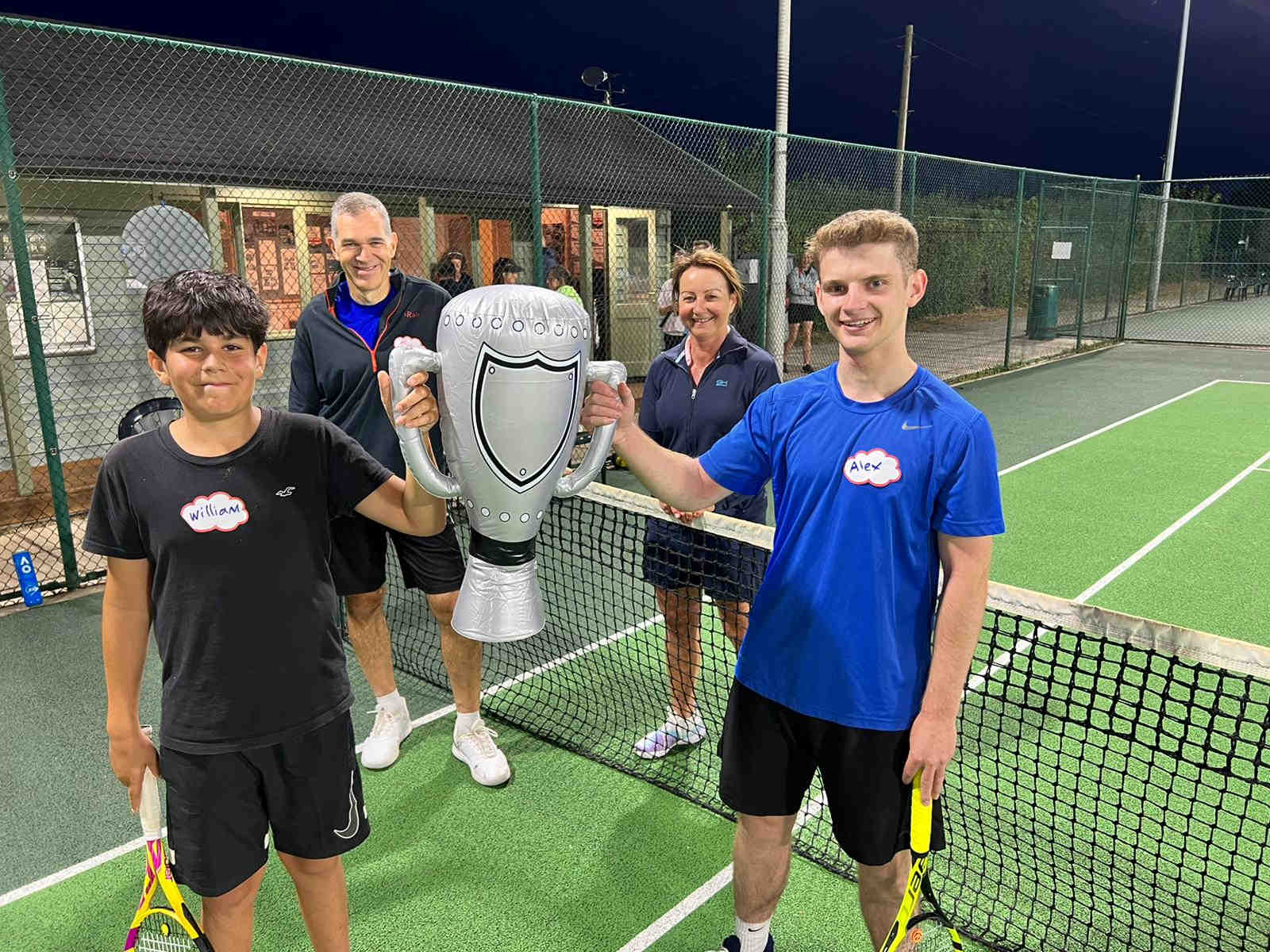 Great weather for our Big Tennis Day, with over 100 guests attending. See video below for highlights.

Congratulations to the Silver-medal-winning Robert Piggott team after their performance in the school county competition at Bisham Abbey yesterday! They played really well to beat 7 other schools in Wokingham borough and then 8 teams from the rest of the county. All Wargrave tennis club players! 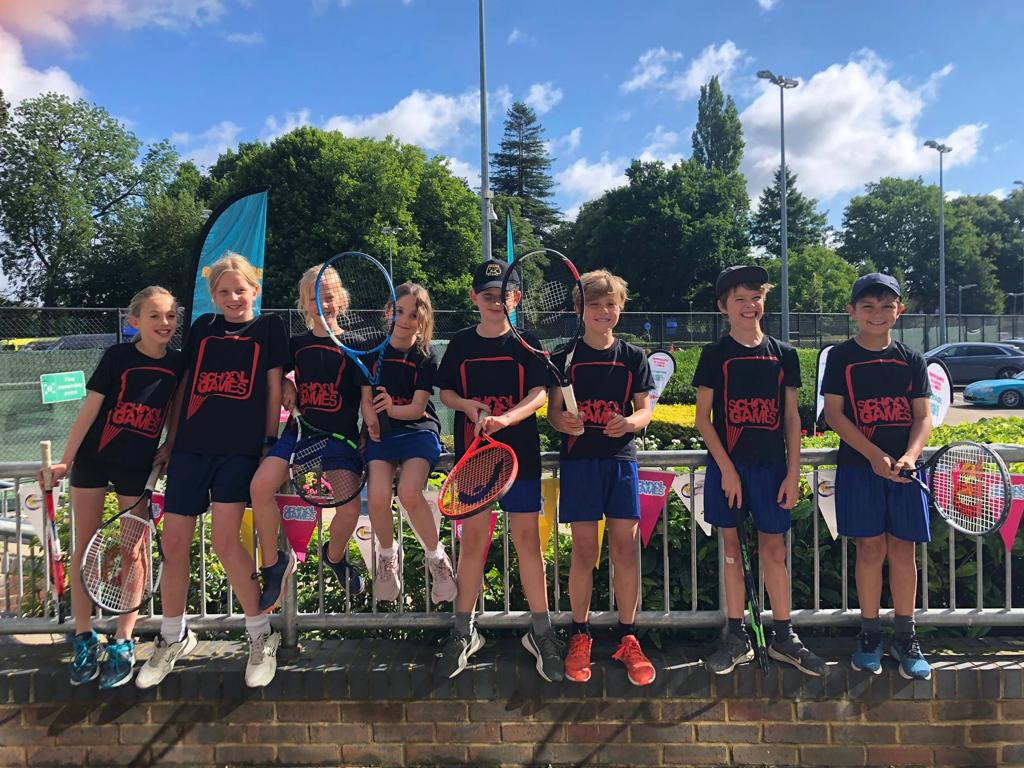 Congratulations to Wendy Franklin and Lawrie Frew who won June’s 20/20 Tournament, winning a closely fought final against Lizz Tripp and Nicola Chand. The event was the second of four monthly tournaments designed to encourage fun and competitive play for players of all standards and ability. 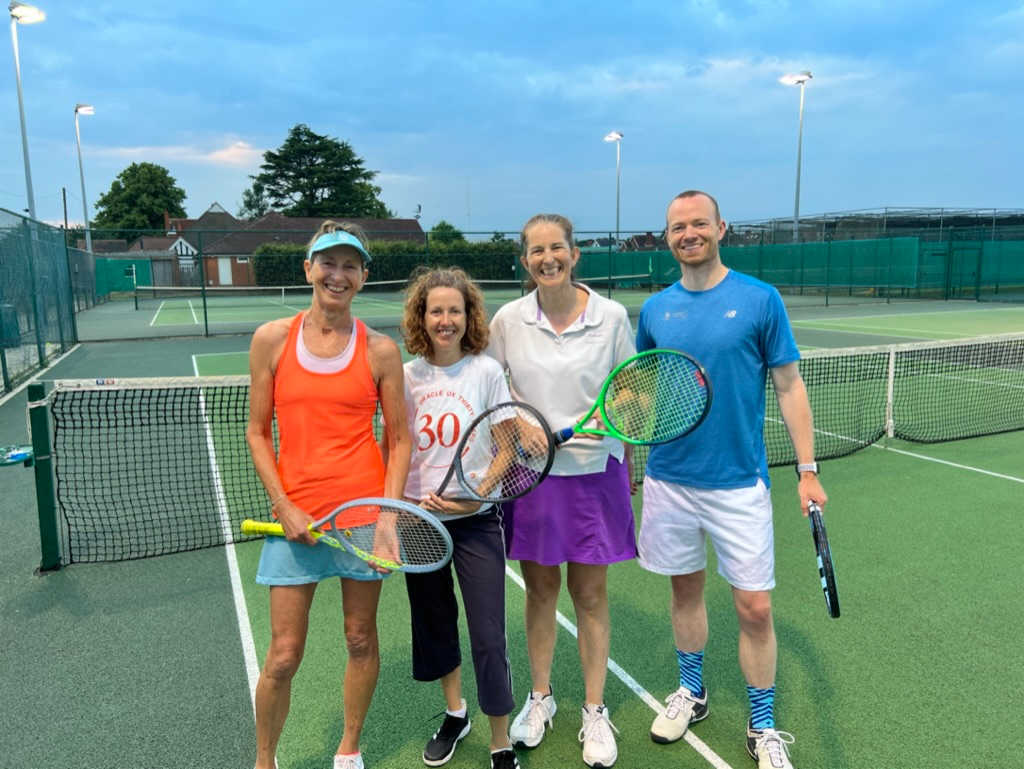 Congratulations to Sue Gutierrez and Christine Reid who won our inaugural Thursday Night 20/20 Club Night Tournament, winning a closely fought final, 21-16 against Denise Peet and Richard Vertigan. The event was the first of four monthly tournaments designed to encourage fun and competitive play for all standards of players. Everyone was randomly drawn with a partner, and then played three short 40 point matches. The top 8 players qualified for the semi-finals while everyone else had a glass of wine! 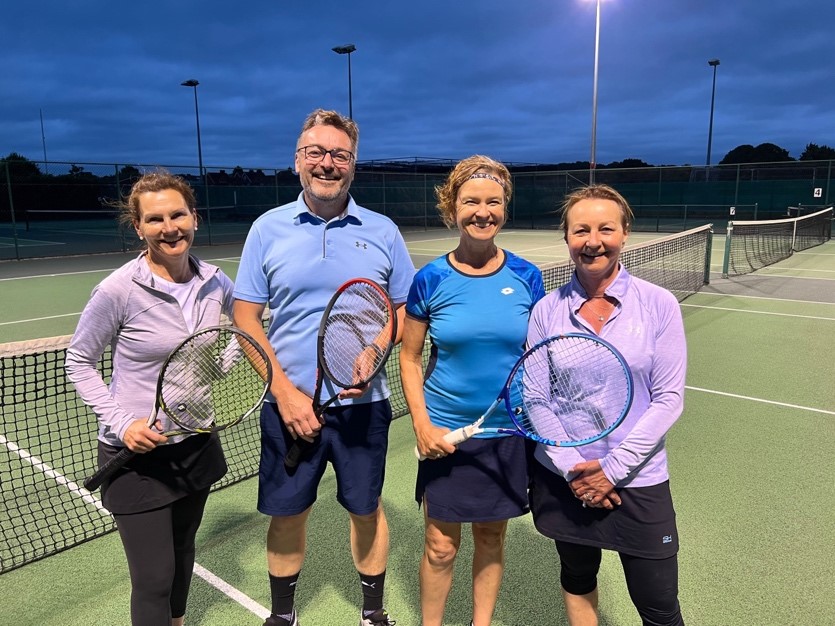 Well done to all the players who took part in our Easter American Family Tournament. We had 24 players in the main competition, initially playing three “12 game matches” in three separate groups. After a break for cake and prosecco, the top eight players took part in a “fast-4” semi-final and final format, with Charles Freeman and Wendy Franklin the overall winners. In addition to the main competition, ten junior players had some fun games and drills with Johnny Combes, one of our excellent Junior Club Coaches. 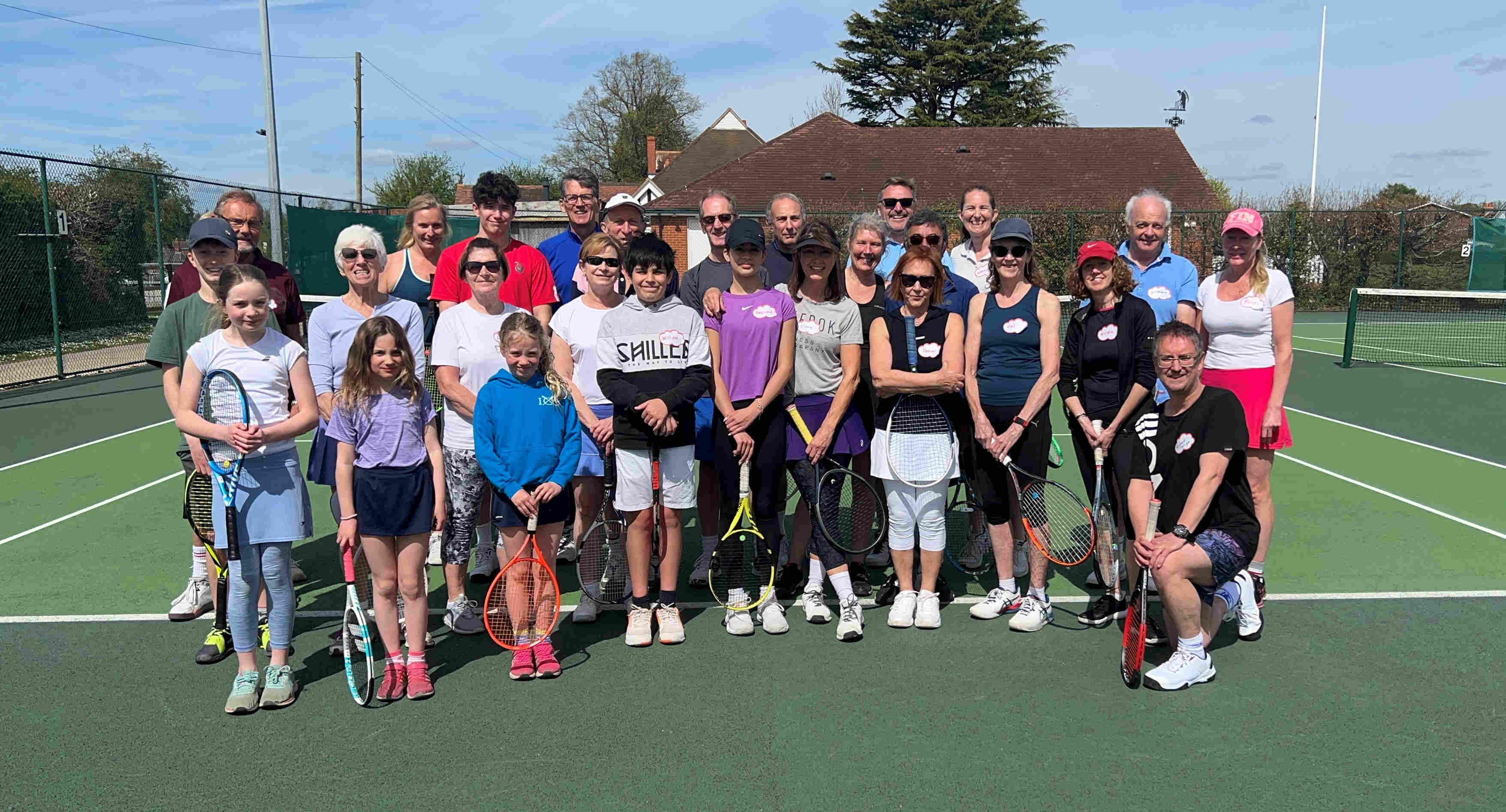 Over 70% of all adult members have recently taken part in a 4-week EGM voting process to consider three potential investment options for the Club to follow this coming season. This included “no investment” (option 1); investment in modern LED floodlighting on all eight courts (option 2); or to replace two of our existing eight asphalt courts with all-weather artificial clay (option 3). 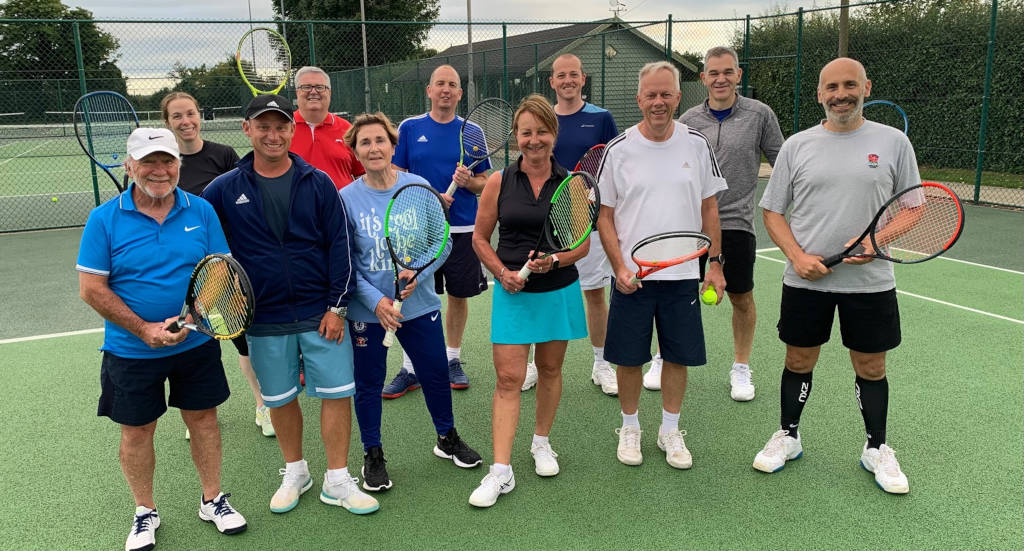 When the rain finally stopped, play got underway with two groups of 4 randomly selected pairs in a mixed format competition. Each pair played 3 matches of 8 games, with selected pairs switching partners after 4 games. The top two individual players in Group 1 were Jenny Harding and Jim Harding, with Richard Vertigan and John Churchhouse the top two players in Group 2. In the “grand play-off final”, John and Richard edged to victory in a tense deciding game tie break.

Thanks to all members (and their guests) who took a risk with the weather, and look out for more social competitions in the year ahead .

A band of keen tennis players braved the Halloween wind and rain to take part in a fancy-dress American Tournament on Sunday 31st October. When the sun finally came out, sixteen adults took part in the main mixed format competition, with eight players in two separate box leagues. The winners of League 1 were Rebecca Salisbury-Beard and Alex Pecorari, with Linda Nelson and Ralph Miller the winners of League 2. In the “Grand Horror Final”, Alex and Rebecca narrowly came out on top, 3 games to 2.

In addition to the adult competition, a separate kids competition was run by our two Junior Assistants, Johnny Coombes and Sam Barnwell. Thanks to all members who braved the weather and many thanks to Dave Smith, our former Chairman, for running the afternoon and making it such fun.

This year's summer tennis season came to a close in September with a fun Pizza and Prosecco evening, with all members (both old, young and new) celebrating a busy and successful year across all areas of the Club.

Bev Birkett, our new Juniors Co-ordinator, has been hard working with our coaching team to support the growing popularity of junior tennis at Wargrave. We now have teams entering all age groups in the Berkshire Leagues and there are a number of junior tournaments planned in the diary for the rest of the year. This includes a parents and kids competition and a fancy-dress Halloween Tournament in October. We are also running some lively junior club night sessions every Friday (in term time) from 4.30pm to 5.30pm. To find out more, please come along on a Friday afternoon and give the session a try. 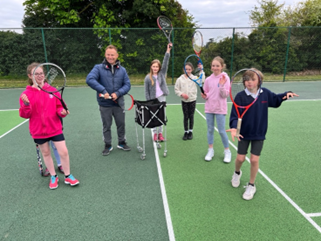 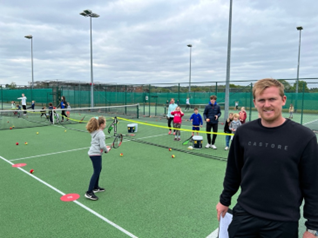 Wargrave’s under 10s mixed team played some stellar tennis this winter, winning all their matches to finish top of the Berkshire Junior National Winter League, Division 1 (Group B). The team, picture below, included Eddie Copland, Kabir Khurana, Georgina Gubbins and Jess Beard. They are now practicing hard and looking forward to the summer league along with five other Junior teams covering six age groups from under 9 to under 18. If you would like to know more about junior tennis, please contact our head coach Chris Ovenden. 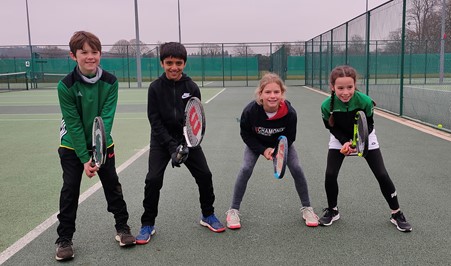 The Committee are pleased to announce that the Friday night junior club sessions will resume on the 4th February from 4.30pm. The sessions are supported by our coaches and are free to all our junior members. Our hope is that if attendance is strong, we will be able to support these sessions throughout the year, even on cold Friday evenings in the winter months.

We're delighted to report that five of our eight courts (1,2,3,4 and 8) have just had a DEEP CLEAN plus moss treatment. Courts 5,6 and 7 will be deep cleaned and treated in early January (the contractor was unable to do all 8 courts before Christmas). In line with guidance from the contractor, we will carry out court deep cleaning every 4 years and moss treatment annually. Update on LED lights and the potential for two artificial clay courts to follow in the New Year.

All our Wargrave teams have made steady progress in the Berkshire Winter Doubles Leagues. This season we are fielding 14 teams, including 5 mens, 4 ladies and 5 mixed teams. At time of writing, 6 of the 14 teams are in strong contention for promotion, with our Mixed Doubles 1st Team top of Division 1 after some excellent wins against Maidenhead and Windsor. Team practice sessions are run every Wednesday evening and are open to all members who want to play competitive team tennis.

An online survey was run with all members of Wargrave Tennis Club from 22nd September to 10th October 2021. The objective of the survey was to ask members to evaluate a range of potential ideas, that could help to advance the sport of tennis for residents of Wargrave and the surrounding area. 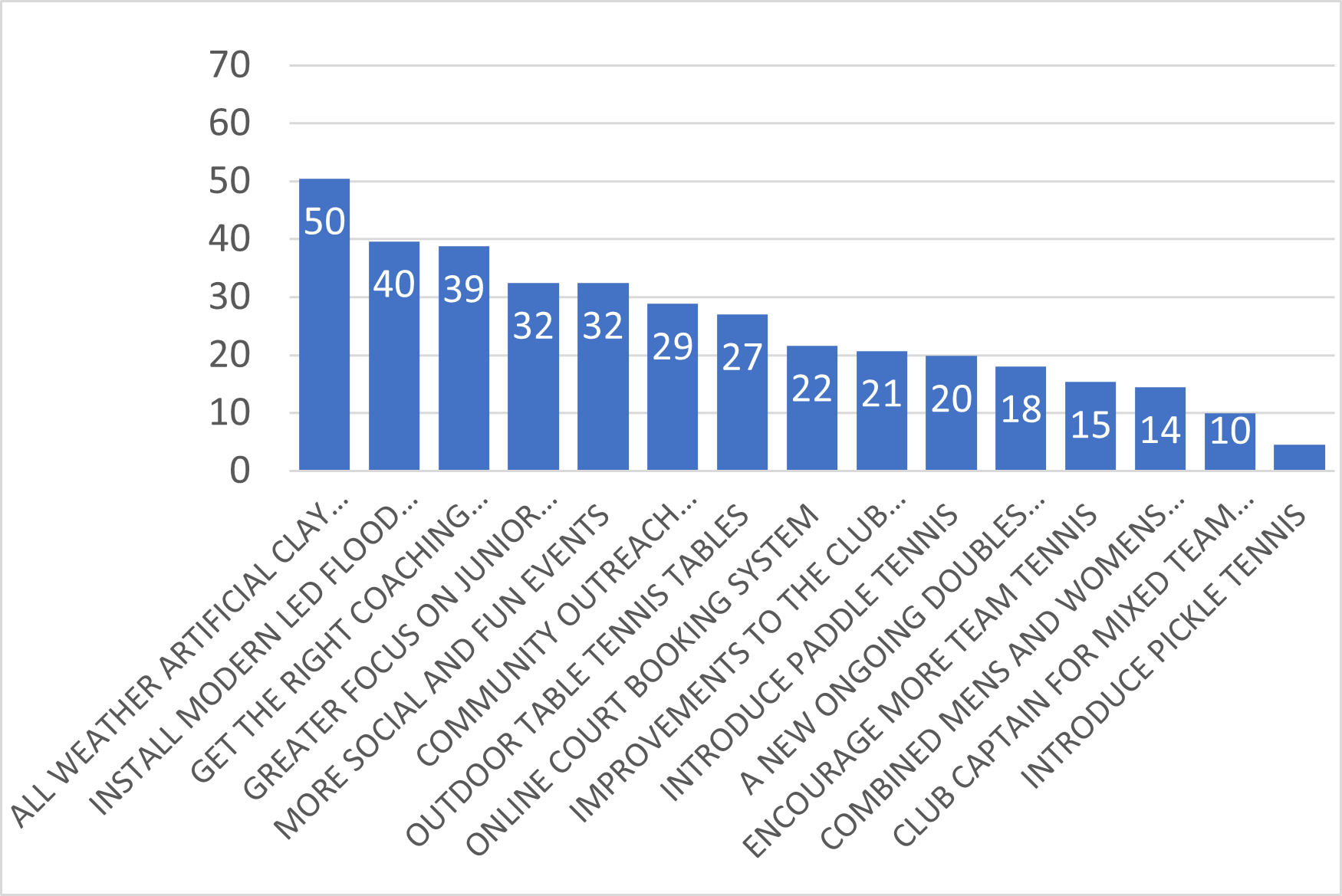 Of the ideas tested, five ideas had “significant appeal” based on a response from 47% of all members. The five winning ideas included:

1. ALL WEATHER ARTIFICIAL CLAY COURTS (50% All Members / 67% Team Players)
If costs allow, to introduce all-weather artificial clay on up to 2 courts. Artificial clay is an LTA approved surface that is used by many clubs in the area e.g. Windsor, Bracknell and Maidenhead. It has many advantages over tarmac: 1) playable in wet conditions; 2) reduced injuries to knees and joints; 3) extends life of tennis balls; 4) attract new members; 5) more variety for teams etc.

2. INSTALL MODERN LED FLOOD LIGHTS (40% All Members / 48% Social Players)
If costs allow, to install new LED lights on all our courts. LED lights save money on electricity versus current lights and offer the benefit of “instant on“ (avoiding the warm-up time). And positioned correctly, they can provide a clearer light for night-time play. Wokingham Tennis Club use these types of lights.

4. MORE SOCIAL AND FUN EVENTS (32% All Members / 48% Social Players)
Find and appoint a Social Secretary and offer a regular program of social events and fun tennis days that would appeal to current and new members of all ages e.g. annual Christmas party; tennis fun open days with speed serve measurer. Idea to include regular monthly social tennis on the first Thursday of every month with a theme e.g. Pimms and Pizza, Mulled Wine and Mince Pies, Halloween All Ages Tennis etc.

5. GREATER FOCUS ON JUNIOR TENNIS (32% All Members / 76% Junior Players)
To appoint a committee member to work with the coaches to ensure that we have a dedicated focus on kids / junior tennis. To include support for kids competitions both internally and with other clubs, and to encourage junior players to make the move up to adult teams and adult play etc.

NEXT STEPS
Thanks to all members who voted in the survey, and for such a good turnout (which was higher than the 43% who voted in our last local elections!). Based on the results, the new committee will now focus on progressing the top five ideas (in addition to their other duties). For potential new lights and new courts, we will be running a detailed feasibility study over the next three months, with the aim of presenting a proposal to the membership by March 2022.

Junior tennis continues to grow at Wargrave and our two LTA coaches (Chris and Steve) are already starting to see the “Emma Raducanu effect”, with the courts filling up after her incredible success at both Wimbledon and the US Open. We currently have over 100 junior members and in the Summer, we entered 5 teams in the National Tennis League from under eight to under 18, in both girls and boys. The free junior members club night has re-started on a Friday evening from 4.30pm and will run until the October half-term.

Photo from the Lawn Tennis Association

Congratulations to all our teams who delivered some excellent results in the highly competitive Berkshire League and the National Team Leagues. The ladies run four teams, with both the 1st and 2nd teams achieving promotion. Of the five Mens’ teams, the first team came second in their league, while the 2nd and 3rd teams were both promoted. And towards the end of the summer, our five mixed teams had strong performances, with promotion for the 2nd and 3rd mixed teams and the mixed 1st team being promoted as champions with a final win against Peppard. The club also fielded two mens and three ladies vets teams, with the ladies Vets A team gaining promotion.

Following the July AGM, a new committee was appointed to build on the tremendous success achieved under the leadership of Dave Smith. Over the past ten years, the outgoing Committee has helped to transform the facilities of the Club. We now offer our members (and potential new members): eight high-quality flood-lit courts; an upgraded club house; 14 teams in the Berkshire League; regular club nights and social tournaments; a thriving competitive box league; and a growing juniors’ section under the guidance of our two LTA club coaches.

Over the next three months, following an online survey with all members, the new committee will be pulling together a plan of future improvements. In developing this plan, our objectives will be to encourage and support both current and new members, of all ages and abilities, to play better competitive or social tennis in an environment that continues to be fun, safe and inclusive.